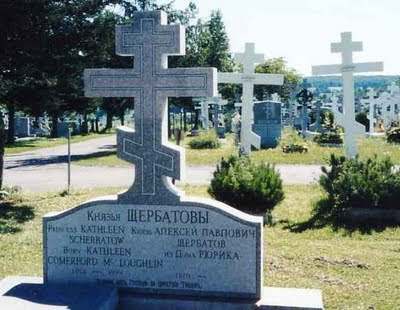 The grave of Princess Kathleeen Comerford Scherbatow, and her husband, Prince Alexis Scherbatow, at the Holy Trinity Russian Orthodox Monastery in Jordanville

Princess Kathleen Comerford Scherbatow was born Kathleen Comerford McLoughlin on 18 December 1914 in Briarcliff, New York. Her mother was Edwina Whitehouse (nee Comerford). Her father, the artist, Gregory Van Zandt McLoughlin, was a descendant of New York’s founding figures, Peter van Stuyvesant. Her great-grandfather, Senator Cornelius Cole (1822-1924), was the first US Senator from the state of California (1867-1873) – the eastern California community of Coleville in Mono County is named after him.

Kathleen attended private schools in California and Maryland. She was an accomplished and well-regarded artist in her younger days. She first became interested in painting while attending the Bishop School in La Jolla, California, later perfecting her craft in drawings and oils at the Oldfield School in Baltimore, Maryland. 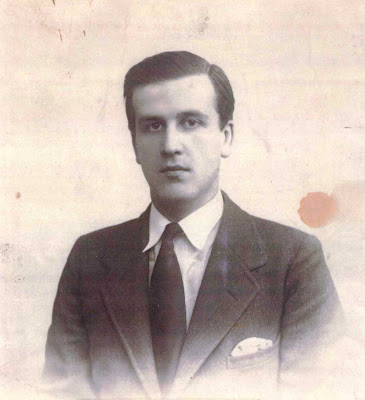 
In 1941, Kathleen married Prince Alexis Pavlovich Scherbatow (1910-2003), who was born in Saint Petersburg, Russia. He claimed descent from the House of Rurik, legendary founders of the first Russian dynasty. His father, Prince Paul Scherbatov, was a colonel and aide-de-camp to the Grand Duke Nicholas, commander of the Russian Army on the Western and Turkish fronts during World War I. His mother, Princess Anna Bariatinsky, was lady-in-waiting to Empress Alexandra of Russia. His brother, Prince Kyril Scherbatow (1909-1993), was a godson of the Czar Nicholas II of Russia.

As children, Prince Alexis and Prince Kyril played in the palace of the Czar in Saint Petersburg and knew Rasputin, who was later killed by the princes’ uncles.

At the Russian Revolution in 1917, the family escaped with his parents from the court of the Czar, and left Russia in 1920. In exile, Prince Alexis and other family members lived in Constantinople (Istanbul), Sofia, Rome and Brussels. Eventually, Prince Kyril arrived in the United States in 1932, as a representative for Veuve Cliquot champagne. Prince Alexis followed him to the US in 1937.

Alexis was in the US army from 1943 to 1945 and served in Europe. After World War II, he worked for the Tolstoy Foundation, which aids Russian immigrants in the United States, and assisted in the writing of books on Russian topics. After receiving a doctorate in history from Columbia University, New York, he taught history part-time at Fairleigh Dickinson University, new Jersey, from 1962 to 1966 and then was a full-time Professor of History there, teaching history and political science, until 1980. 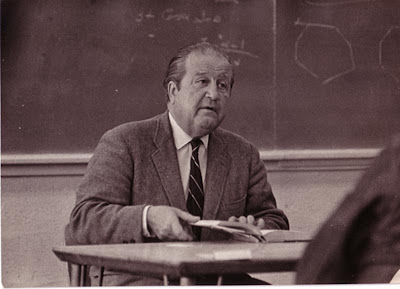 Prince Alexis Pavlovich Scherbatow when he was Professor of History at Fairleigh Dickinson University ... in 1941, he married Kathleen Comerford McLoughlin (1914-1999)

Kathleen and Alexis were both active in the Russian Nobility Association of America, based in Manhattan. The activities of the Russian Nobility Association of America have included conducting genealogical research, giving money to orphanages in Russia and performing other charitable work. He was the association’s president from 1982 until he retired in 2001.

In their retirement, Kathleen and Alexis lived on the Upper East Side and in Manhattan in New York. Princess Kathleen died shortly before her 85th birthday on 5 December 1999 at Lenox Hill Hospital after a short illness. She was survived by two sisters, survivors include two sisters, Cornelia Van Winkle of Bedford, New York, and Hope Ryan of the Riverdale section of the Bronx.

Her brother, Comerford Whitehouse McLoughlin (1916-1987) of South Kingston, Rhode Island, died at the Westerley (Rhode Island) Hospital in Rhode Island on 26 June 26, 1987. He was born in Colorado Springs, Colorado, on 27 January 1916. He joined the staff of Time magazine in 1939. As a captain in the US army (1941-1945), he took part in the campaigns in Northern France, Rhineland, and Central Europe, and was decorated with the Bronze Star. He retired from Time after 35 years with the organisation, and in retirement he lived in Southbury, Connecticut.

Kathleen’s funeral service was held at the Russian Orthodox Cathedral of Our Lady of the Sign, on Park Avenue in New York. Alexis and Kathleen are buried side-by-side in the cemetery of the Holy Trinity Monastery, a Russian Orthodox community of Russian-speaking monks, seminary students and lay workers, on Robinson Road, a mile north of the tiny village of Jordanville in central New York. The monastery is the largest Orthodox monastery in the US and one of the largest Orthodox seminaries, and many Russian Orthodox Christians from across the US ask to be buried in the Holy Trinity Cemetery.

Posted by Patrick Comerford at 20:58