Appendix 1: Comerford and some other placenames

Comerford’s Lane was close to Upper John Street in Kilkenny. It is named in 1832, but its location is no longer known. There is a Comerford Lane in Carrick-on-Suir, Co Tipperary, and Comerford’s Lot is in Golden, Co Tipperary.

In addition, in North London, there is a Quemerford Road in Islington, London N7.

Outside London, there is a Comerford Way in Winslow in Buckinghamshire. It may take its name from the former district of Great Comerford, although a local website says it is named after Denis Comerford, the last railway signalman in Winslow. He worked there from 1937 until he was made redundant in 1968, when the railway closed. He lived at No 11 Station Road, Winslow.

Comberford in Staffordshire and the Comberford family have given their name to a number of streets: There is a Comberford Road in Tamworth, Staffordshire, while Comberford Lane runs from the entrance to the drive leading to Comberford Hall and the village of Wigginton. Comberford Drive is in Wednesbury, Cumberford Avenue in Birmingham is the location of Cross Primary School, while Cumberford Close and Cumberford Hill are in Bloxham, near Banbury, Oxfordshire.

Any Comerford who has been frustrated by misspellings or being asked to repeat their name, will doubtless have wondered where Somerford is, or if there is such a place. And there are places called Somerford in Staffordshire, Gloucestershire, Wiltshire and Cheshire.

Somerford Hall is an elegant Georgian mansion set in over 200 acres of landscaped parkland in Staffordshire six miles from both Stafford and Wolverhampton, and 15 miles north of Birmingham.

Somerford Hall is now marketed as a venue for conferences, corporate hospitality, weddings, parties and other special occasions. There are five event rooms and 20 bedrooms. 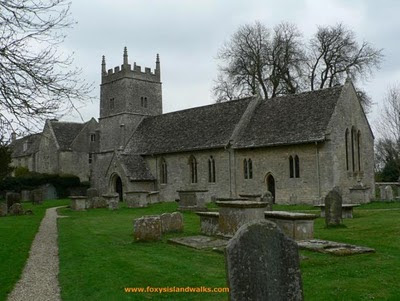 Somerford Keynes is also the name of a character in the Rutshire Chronicles by Jilly Cooper.

Excavations in the late 1980s uncovered evidence of Iron Age and Roman settlements at Somerford Keynes, dating from the early 1st century AD to the early 2nd century AD, with an unusually large number of coins and brooches. However, the village is first mentioned in the year 685 AD, when a charter confirmed a gift of 40 hides of land by King Ethelred’s nephew, Bertwald, to Aldhelm, the first Abbot of Malmesbury.

In 1211, the manor was held by William de Cahaignes, an ancestor of the Keynes family. The manor house dates from the 15th century and is Grade II listed. The Church of All Saints is a Grade II* listed building with Saxon foundations from about 685. It was largely rebuilt in the early 13th century, with the tower being added in 1710-1713, which was restored 1875.

The Parish Church of Saint Peter and Saint Paul in Great Somerford, Wiltshire

In Wiltshire, Great Somerford, or Somerford Magna, is a village within Dauntsey Vale, next to the River Avon, and about 19 km (12 miles) west of Swindon. The parish church is the Church of Saint Peter and Saint Paul

The Little Somerford route was much more popular, and rail traffic through Great Somerford declined steeply. The station there was downgraded to Great Somerford Halt in May 1922; by the time it closed altogether in 1933, it was averaging one passenger per train.

Neighbouring Little Somerford, which is eight miles north-east of Chippenham and three miles south east of Malmesbury, has a population of 360. In the past, the village has been known as Somerford Parva, Somerford Molines and Somerford Maudit – John Maudit owned much of the land in the 14th century.

The parish church of Saint John the Baptist in Little Somerford has noteworthy wall paintings, carved wood, stained glass windows and a rood screen thought to have come from Malmesbury Abbey and dated about 1350.

All Saints’ Church, Somerford, Cheshire ... built as a chapel for Someford Hall in 1725, it now serves as a chapel of ease

In Cheshire, Somerford is near the hamlet of Brereton Heath, between Congleton and Holmes Chapel. For generations, Somerford Hall was the home of the Shackerley family. However, Somerford Hall was demolished in the 20th century, and all that survives of the old house is one wing and the stables.

All Saints’ Chapel in Somerford is a Grade II* listed building, and since 1943 it has been a chapel of ease in the benefice of Astbury and Smallwood in the Diocese of Chester.

The chapel was built in 1725 as a domestic chapel to Somerford Hall by Peter Shackerley, who died a year later and who is buried in a grave in the churchyard. The chapel is built in chequer brick in four bays. On the north side of the altar is a 17th century memorial to Elizabeth Shakerley who died in 1691. 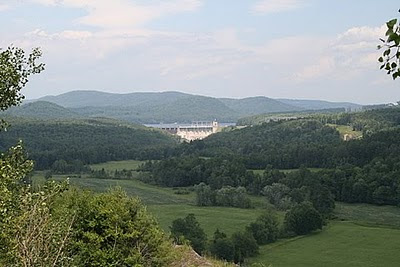 The Frank D Comerford Dam is an international-style concrete dam in the Fifteen Mile Falls of the Connecticut River, on the borders of New Hampshire and Vermont. The dam, located next to Monroe, New Hampshire, was named after Frank D Comerford, who played an instrumental role in its construction. Building work began in 1928 and the work was completed in 1931.

On 30 September 1930, President Herbert Hoover remotely initiated the generation of electricity from the Comerford Dam, which was the largest single hydroelectric development in New England at the time. This was the first in a series, harnessing hydroelectric power in the US in the 1930s.

The dam and the power plant are operated by the TransCanda Corporation, which bought them from USGen New England in 2005. 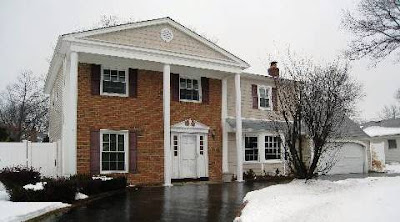 Comerford Road is a street-name in. Westmorland, New Hampshire and in Port Jefferson, Suffolk, New York, there is a street named Comerford Street in Tullahoma, Coffee, Tennessee, a Comerford Place in Fair Lawn, New Jersey, and a Comerford Avenue in Ridley Park, Pennsylvania. 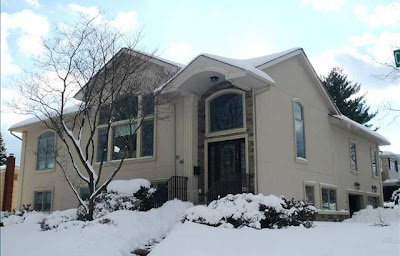 In addition, there is Commerford Road in Concord, Massachusetts, and a Cumerford Street in Providence, Rhode island. 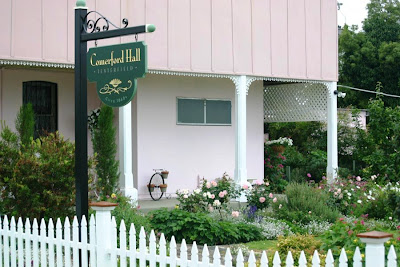 Comerford Hall ... a tradition dating back to the second half of the 19th century

Comerford Hall is a Bed and Breakfast home in the heritage-rich Australian town of Tenterfield, on the picturesque northern New England Tablelands of New South Wales. This historic building dates from the 1860s. Comerford Hall, on corner of Pelham Street and Molesworth Street in Tenterfield, stands on land that was bought from the Crown by a Daniel Murphy for £7.10.0 on 9 February 1855.

For seven generations from 1881, the property belonged to the Leis family, whose members ran it as the Terminus Hotel (1881–1916), as a maternity hospital (Parkfield Private Hospital) and as a guesthouse.

How did Comerford Hall get its interesting name? It may have been named by the Leis family after Harold Herman Leis (d. 1928) of Tenterfield married Florence Kathleen Nolan (born 1898) in 1923. She was a daughter of Patrick Michael Nolan (1871-1947) and his wife Mary Ann Agnes Comerford; Patrick Nolan’s father came to New South Wales from Co Carlow in 1855 and settled in the Toowoomba Area, and Patrick Nolan and Mary Comerford were married in Toowoomba on 1893.

Until some years ago, Comerford was run by Louise and Tony Barker. By January 2014, Comerford Hall was on the market for A$395,000 through Alford & Duff First National, Tenterfield. It is now run by Anne and Chris, and is also available through airbnb.

Comerford Close, in Cessnock, near Newcastle, on the coast of New South Wales, is named after James Comerford, the trade union activist and historian of the miners’ lockout in New South Wales (see Comerford Profiles 31: Jim Comerford (1913-2006), Australian trade unionist).

Comerford Street and Comerford Avenue in Cowra, New South Wales, are named after the family of Thomas Comerford and his wife Mary nee Hogan), who owned the land originally. He was a son of James Comerford of Ballyneale, Co Tipperary. The family came to Australia in 1840.

In Queensland, there is a Comerford Road in Bajool, west of Gladstone, and a Comerford Street in Finch Hatton, west of Mackay.

In Western Australia, there is a Comerford Road in Mukinbudin.

In Victoria, there is Comerford’s Lane in Barwite, Mansfield, and Comerford’s Find, in Bridge Creek, Mansfield, a bush picnic ground in the Australian alps, where the Blue Range Creek crosses the Blue Range Road. It is so named because in 1907 12-year-old Richard J. Comerford, on his pony “Darkie,” found a little boy who had been lost for three days in the bush. In addition, Commerford Place is in Wonga Park, Melbourne.

Posted by Patrick Comerford at 21:36

Great post Patrick; I've driven by Comerford Avenue a number of times, need to stop and get a picture of the sign one of these days.

Comerford Av. in Cowra is named after my Family. Thomas Comerford and Mary nee Hogan. who owned the land originally.
Thomas was the son of James Comerford of Ballyneale and Mary nee Kelley? Kiely. They came to Australia in 1840.
Laraine

I appreciate the information on the Comerford Dam in Barnet - kjust down the road from me...one correction...the impounded Connecticut river, which forms the Comferford Reservoir, does NOT "supply water to the towns of Littleton, New Hampshire, and Waterford, Vermont." The impounded water is used strictly for hydro-electric power generation, not as a municipal water source as the text implies.

Hello Patrick,
My Great, Great Grandfather Patrick Cummerford immigrated from Ireland, I think around 1850 to 1870, into Toronto Canada. I am in Ireland trying to find some relatives. Any suggestions on how to do this? My Great Grandfather Patrick Cummerford was a well known Veterinarian in the North West state of Idaho who found the source of TB and was able to stop the spread of it in the state of Idaho. A portrait of him is in the States Capitol building honoring him. I would love any information that you might have.
Sincerely,
Connie Baranco

Welcome to Ireland Connie. If you send me a private message on Facebook I can reply with contact details, Patrick