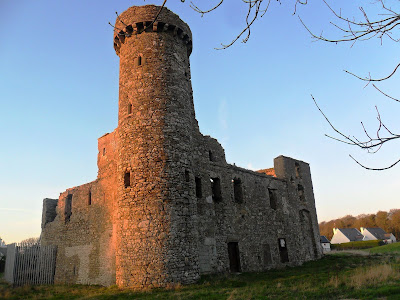 The castle at Fethard-on-Sea was the official residence of Edmond Comerford as Bishop of Ferns at the beginning of the 16th century. One branch of the Comerford family was living nearby in Fethard-on-Sea in the 19th and the early 20th century (Photograph: Patrick Comerford, 2011)

Newbawn is in Adamstown Parish, Co Wexford. The Sweetman family was associated with this parish from the 15th century, and Bishop Nicholas Sweetman was born in the parish.[1] This branch of the Comerford family appears to have been closely related to the Comerfords of Bunclody and Kilkenny [see Chapter 8: Comerford of Bunclody and Dublin], and they were closely related to the Sweetmans of Newbawn. The Revd Laurence Comerford is sometimes described as a nephew of Bishop Nicholas Sweetman, and his brother, Nicholas Comerford, was named after the bishop.

EDWARD COMERFORD (?ca 1721-post 1762) was living at Brownstown, near Newbawn, Co Wexford, in 1762, when Edward Comerford, Mathew Murphy, John Byrne and Thomas Burke were among the displaced Catholic tenants who had been evicted by Robert Leigh (1729-1802/3), the landlord of Rosegarland. They “tried hard to prevent the new Protestant tenants from settling on their lands,” and William, Samuel and Richard Cottoms “were made to feel in every way the displeasure of the old occupiers.” The eviction of Edward Comerford and the others has been linked to the moves by Leigh to settle the area with Protestant freeholders who would vote for the Tottenhams of New Ross. At the outbreak of the 1798 Rising, John and Samuel Cottoms were among those killed in the massacre at Scullabogue Barn near New Ross.[2]

Edward Comerford may have married into the FitzHenry family. He was the father of:

The eldest son of Edward Comerford was:

According to the historian Kevin Whelan, “Bishop Sweetman looked after his clerical relatives, the Fitzhenrys, the Downes, Comerfords, Staffords and Corrins.”[10]

Laurence Comerford was ordained by Bishop Sweetman, and the first record of his ministry is in 1782, at the age of 30 or 31, when the “Rev Mr Cummerton” and Loughlin Doyle were witnesses at a wedding in Cushinstown.[11] On 9 November 1789, he was sent to work as a curate with Canon Michael Fitzhenry, Parish Priest of Bannow, who had fallen into ill-health that autumn. Canon Fitzhenry was a nephew of Bishop Sweetman, who had died three years earlier, and his predecessors at Bannow included the Revd John Fitzhenry, who was curate 1751-1782,[12] a cousin or uncle of Laurence Comerford.[13]

Less than a month after Laurence Comerford’s arrival in Bannow, Canon Fitzhenry died on 4 December 1789. He was only 49, and was buried in John Fitzhenry’s grave in Adamstown.[14] A fortnight after Canon Fitzhenry’s death, the Revd Andrew Devereux, curate of The Hook, was appointed to Bannow on 17 December 1789 as Parish Priest of “Bannow, Carrig, Ambrosetown, Ballynulty, Shimogue, and Ballylingly.” On the same day, Laurence Comerford was transferred as curate to the parish of “Ballymore and Mayglass,” where his parish priests were Canon Peter Sinnot, until 1795, and the Revd Aedan Ennis.[15] His time in that parish was marked by the events of the 1798 Rising. The church at Mayglass was burned by soldiers who were retreating from Wexford to Duncannon on 30 May 1798.[16] Three years later, in 1801, Bishop Caulfield returned Mayglass parish as worth £50 a year, with a curate.[17]

In 1802, Laurence Comerford was made Parish Priest of Monageer, then known as Clone and Boolavogue,[18] succeeding the Revd Patrick Cogley, who had been the victim of vicious Orange attacks, and who was transferred to Duncormack or Rathangan parish.[19] The parish of Clone and Boolavogue represented the old parishes of Clone, with portions of Templeshannon (Enniscorthy), Ballyhuskard and Kilcormack. Boolavogue, which was then a curacy in the parish, is still closely linked in folk memory with the 1798 Rising and Father John Murphy of Kilcormack. One of Laurence Comerford’s first tasks as the new parish priest was to rebuild the chapel of Boolavogue, which was set on fire on 27 May 1798 when John Murphy was curate.[20]

Laurence Comerford “laboured zealously until his retirement in 1816. He went to reside with his relatives in Adamstown.”[21] His successor as parish priest was the Revd Nicholas Codd, previously a curate in Enniscorthy.[22] Laurence survived another 29 years, living in retirement in Adamstown. In his old age, he was totally blind and was led around the roads of Newbawn by his nephew. He had a reputation as a healer, and people came from far and near to visit him.[23] He died on 5 September 1847, in his 95th year.[24] His inscribed tomb can be seen in the old cemetery in Newbawn.[25]

PATRICK COMERFORD (ca 1785?-post 1853), of Horetown South, tenant of Strangman Goff. He married Margaret (‘Peggy’) Redmond and they had three sons and one daughter, including one pair of twins:

1, William (‘Billy’) Comerford, Commerford or Comerton of Newcastle, born ca 1812, living in 1853, when he was a tenant of Francis A. Leigh. He married Bridget (‘Biddy’) Redmond and they had two or three sons:

John and Biddy Comerford were the parents of three or four daughters and two sons:

The younger son of John and Biddy Comerford was:

Laurence married Anne Parle ca 1850, and they were the parents of a son and a daughter:

Thomas and Mary Comerford had at least two sons:

The only surviving son:

LAURENCE COMERFORD (1813-1897) of Dungulph, Fethard-on-Sea, Co Wexford. He was born on 14 October, 1813. He died on 15 April 1897, and is buried in Saint Mogue’s Church of Ireland Churchyard, Fethard-on-Sea.[37] He lived at Dungulph where he was a tenant of the Marquess of Ely. Laurence Comerford and Catherine Walsh had a son and a daughter: 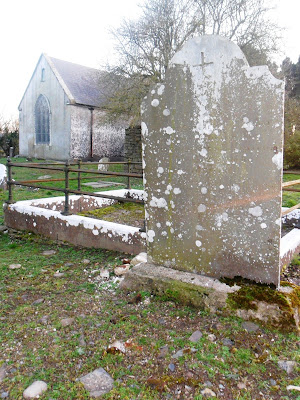 The grave of Laurence Comerford of Dungulph and his daughter Alice in in Saint Mogue’s Churchyard, Fethard-on-Sea, Co Wexford (Photograph: Patrick Comerford, 2011)

Patrick and Catherine Comerford were the parents of five daughters and two sons. Both sons died at sea during the two World Wars:

The elder son of Patrick and Catherine Comerford was:

LAURENCE COMERFORD (1878-1917), was born in Fethard-on-Sea, Co Wexford, in December 1878, and was baptised on 7 December 1878. He married Anastasia Hawkins and they lived at 5 Presentation Row, Waterford. An able seaman on board the SS Coningbeg of Glasgow, he died at sea on 18 December 1917, aged 39, just 2½ months after the death of his father, when it was torpedoed in Caernarvon Bay by the German submarine U-62. Although registered in Glasgow, the SS Coningbeg was from Waterford, and was sailing home with a crew of 40 and four passengers when it was torpedoed without warning. There were no survivors. There were harrowing scenes on the Waterford Quayside as women and children waited in the wet and cold of winter for news of their loved ones. It was after Christmas before the sinking of the SS Coningbeg and the SS Formby within days of each other, a total loss of 83 lives – the worst disaster to befall Waterford in the 20th century.

Like his younger brother Patrick Comerford, who died at sea during World War II, Laurence is named on the Tower Hill memorial in London. Laurence Comerford is also named on the War Memorial to the SS Coningbeg on Adelphi Quay, opposite Reginald’s Tower in Waterford, unveiled by President Mary Robinson on 21 December 1997.[43] 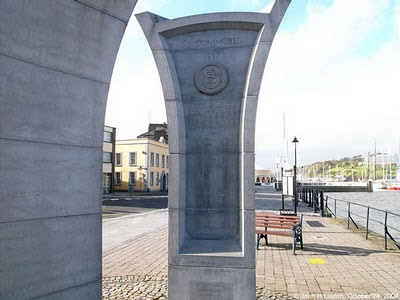 Laurence Comerford is named on the Coningbeg Memorial, unveiled on the quays in Waterford in 1997 by President Mary Robinson

The deaths at sea of the two brothers Laurence and Patrick Comerford during the two World Wars brought to an end the male line of the Comerfords of Dungulph, who had been associated with Fethard-on-Sea since the beginning of the 19th century.[44]

What a fantastically professional looking and informative blog. I found it when I was looking for other Fitz-Henry references on the web. I hope that I will be able to find a link between your Fitz-Henrys and those in my research.
Best wishes
Jo Fitz-Henry
The Fitz(-)Henry one-name study at the Guild of One-Name studies.
fitz-henry@one-name.org

re: Comerford of Horetown, Newbawn, etc. Co. Wexford
I have just seen your blog and have Comerford ancestors from Newbawn, Adamstown area. I believe they are definitely persons mentioned here.My great great grandmother was Margaret Comerford b. c1800, her husband was John (Mc)Carty b. c1800, died circa 1840 in Newbawn of a cart accident. While name was McCarty, Griffiths Eval has as Carty. While your blog says 6 daughters, 2 sons, our family lore said 10 total children.
Definitely two sons, John McCarty b. 1825, James 1828, Mary 1832, Kate b?, Bridget McCarty Daly b Feb 17, 1835 Newbawn.
Because of facts in your blog, I believe my great great grandmother Margaret Comerford McCarty was the daughter of Nicholas Comerford ca1755-1825. Until now I was aware Margaret had other siblings, but didn't know their names. I also believe she was definitely related to your Rev. Laurence Comerford c1751-1847. Because when John McCarty suddenly died 1840, all but the youngest infant babe were shipped off to live with other relatives. My great grandmother, Margaret Comerford's daughter, Bridget McCarty Daly, was sent to stay with an uncle, a retired priest who lived somewhere nearby with his sister. Our family oral history said he was a jesuit but he may not have been. Bridget remained with them until the death of the priest uncle and his sister. Bridget emigrated to USA, and wound up in New Jersey. Also, to my knowledge she had a Comerford male relative who also wound up living in New Jersey too. One of her children was named Margaret Comerford Daly. One of her sons was named after an uncle, Laurence. At least three of her other siblings definitely,in time, emigrated to USA also, but I don't know what happened to the rest. These are all reasons why I'm pretty certain this is same people. Also on your blog of this part of Comerfords, I see some other marriages with other Carty's in the Newbawn Adamstown area, which makes me more sure also. Would really hope you would be in contact with me. Hoping to hear from you. Thanks for your great blog!
AliceRevilleTomlin@gmail.com