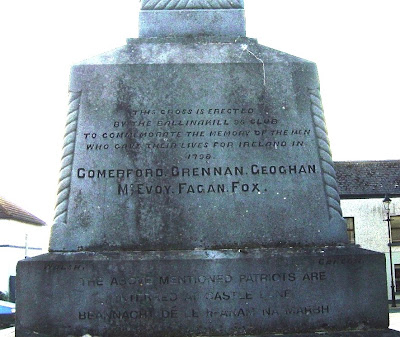 12.1: The Comerford family is recalled on the 1798 memorial in Ballinakill, Co Laois (Photograph: Patrick Comerford, 2008)

A Comerford from Ballinakill, Co Laois, is said to have been a hero during the 1798 Rising. A monument erected in the Square in the centre of Ballinakill over 100 years ago in 1898 bears the inscription:

“This monument is erected by the Ballinkill ’98 Club to commemorate the memory of the men who gave their lives for Ireland in 1798. COMERFORD. GRENNAN. GEOGHAN. McEVOY. FAGAN. FOX. The above mentioned patriots are interred at Castle Lane. Beannacht Dé le h-anam na marbh.”[1]

The land struggle in Newbawn

Edward Comerford (?ca 1721-post 1762) was living at Brownstown, near Newbawn, Co Wexford, in 1762 [see Chapter 11: Comerford of Horetown, Newbawn, &c., Co Wexford]. In that year, when Edward Comerford, Mathew Murphy, John Byrne and Thomas Burke were among the displaced Catholic tenants who had been evicted by Robert Leigh (1729-1802/3), the landlord of Rosegarland.[2]

Edward Comerford and Leigh’s two other evicted neighbours “tried hard to prevent the new Protestant tenants from settling on their lands,” and William, Samuel and Richard Cottoms “were made to feel in every way the displeasure of the old occupiers.”

The eviction of Edward Comerford and the others has been linked to the moves by Leigh to settle the area with Protestant freeholders who would vote for the Tottenhams of New Ross. A generation later, at the outbreak of the 1798 Rising, John and Samuel Cottoms were among those killed in the massacre at Scullabogue Barn near New Ross.[2]

A participant in the Rising 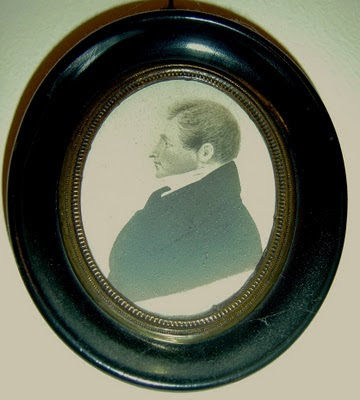 James Comerford (ca 1775-1825), of Ballyminane, Newtownbarry, Co Wexford, witnessed the events in 1798 in the Killane and Bunclody areas of north-west Co Wexford.

James was born ca 1775, a son of Edmond Comerford.[3] His niece, Eleanor Comerford, was married to John Whitty, a first cousin of Father John Murphy of 1798. A nephew, James Comerford of Carlow, was father of the Carlow historian, Bishop Michael Comerford [see Comerford Profiles 16: Bishop Michael Comerford (1831-1895), bishop and historian], who was a co-founder of the Ossory Archaeological Society and author of the definitive history of the Diocese of Kildare and Leighlin.

James Comerford was employed by Thomas Bates of Lermount or Lyrmount House, at Askinvillar, near Killanne, Co Wexford. James knew many of the local people in the Killanne and Kiltealy are who were active in the 1798 Rising. [4]

After the 1798 Rising, as James Cummerford, he was called as a witness in the trial of three rebels from the Killanne and Kiltealy area in Newtownbarry (Bunclody) on 5 November 1798. The evidence at the court martial stated that James knew the prisoners and had frequently seen them associating with the rebels, armed with firearms.[5]

James Comerford was the father of: 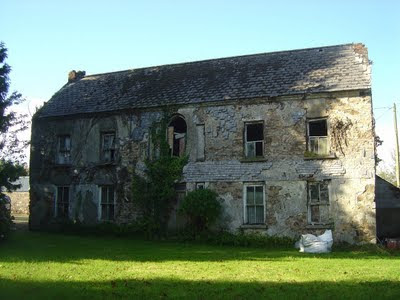 12.3: Kyle Glebe in Oulart Village ... James Comerford was killed here on 27 May 1798; his widow Elizabeth and their children were then taken to Castle Annesley and on to Wexford Town (Photograph: Patrick Comerford, 2009)

James Comerford (?ca 1763-1798), who was one of the first people killed during the 1798 Rising. This James Comerford was one of the four Protestants killed in the attack on Kyle Glebe in Oulart Village, along with Samuel Judd, Thomas Earl and Joseph Aston after the Rector of Kilmuckridge, the Revd Robert Burrowes, was murdered in front of the house prior to the Battle of Oulart Hill on Sunday 27 May 1798. 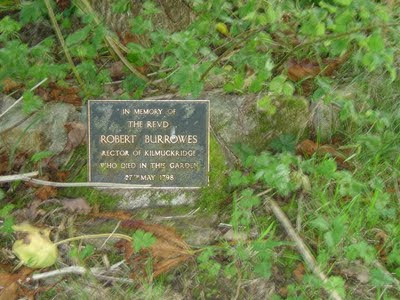 12.4: The memorial to the Revd Robert Burrowes on the former lawn of Kyle Glebe … the tree was planted during the 1998 commemorations (Photograph: Patrick Comerford, 2009)

In his narrative of the 1798 Rising in Co Wexford, Sir Richard Musgrave indicates that James Comerford was a parishioner of Robert Burrowes, although the local historian, Brian Cleary from Oulart, states he was also a Yeoman.[9] 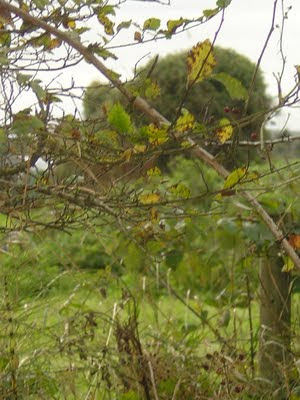 James Comerford’s widow Elizabeth and their five children, who were at Kyle Glebe that morning, survived those horrifying events. They were probably taken with the Burrowes family to Castle Annesley, the home of the Clifford family in Kilmuckridge – Sally Clifford was a niece of Robert Burrowes.

From Castle Annesley in Kilmuckridge, it appears, the Comerford and Burrowes family were taken to Wexford town.[10] 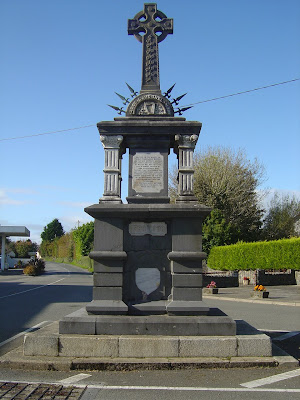 These two James Comerfords were contemporaries with another Comerford player in the events of 1798 in 1798 – the Revd Laurence Comerford (1751-1847) of Newbawn and Adamstown, Co Wexford. While he was the curate in Ballymore and Mayglass in 1798, the church at Mayglass was burned by soldiers who were retreating from Wexford to Duncannon on 30 May 1798.[11]

Four years later, in 1802, Father Laurence Comerford was made Parish Priest of Monageer, then known as Clone and Boolavogue,[12] succeeding the Revd Patrick Cogley, who had been a victim of vicious Orange attacks.[13]

The parish of Clone and Boolavogue represented the old parishes of Clone, with portions of Templeshannon (Enniscorthy), Ballyhuskard and Kilcormack. Boolavogue, which was then a curacy in the parish, is still closely linked in folk memory with the 1798 Rising and Father John Murphy of Kilcormack. One of Laurence Comerford’s first tasks as the new parish priest was to rebuild the chapel of Boolavogue, which had been set on fire on 27 May 1798 while Father Murphy was the curate in the parish.[14]

According to the historian Kevin Whelan, “Bishop Sweetman looked after his clerical relatives, the Fitzhenrys, the Downes, Comerfords, Staffords and Corrins.”[19]

Laurence was ordained by Bishop Sweetman, and the first record of his ministry is in 1782, when the “Rev Mr Cummerton” and Loughlin Doyle were witnesses at a wedding in Cushinstown.[20]

On 9 November 1789, he was appointed a curate to the Parish Priest of Bannow, Canon Michael Fitzhenry, who was in ill-health. Canon Fitzhenry was a nephew of Bishop Sweetman, who had died three years earlier, and his predecessors at Bannow included the Revd John Fitzhenry, who was curate 1751-1782,[21] a cousin or uncle of Laurence Comerford.[22]

Less than a month after Laurence Comerford’s arrival in Bannow, Canon Fitzhenry died on 4 December 1789, at the early age of 49.[23] A fortnight later, on 17 December 1789, Laurence Comerford was transferred as curate to the parish of “Ballymore and Mayglass,” where his parish priests were Canon Peter Sinnott, until 1795, and then the Revd Aedan Ennis.[24]

Comerford’s time in that parish was marked by the events of the 1798 Rising. The church at Mayglass was burned by soldiers who were retreating from Wexford to Duncannon on 30 May 1798.[25]

In 1802, Laurence Comerford was made Parish Priest of Monageer, then known as Clone and Boolavogue,[26] in succession to the Revd Patrick Cogley, who had been the victim of vicious Orange attacks, and who was transferred to Duncormack or Rathangan.[27]

12.7: The church at Boolavogue … rebuilt by Father Laurence Comerford in the aftermath of 1798 (Photograph © Liam, Murphy)

The parish of Clone and Boolavogue represented the old parishes of Clone, with portions of Templeshannon (Enniscorthy), Ballyhuskard and Kilcormack. Boolavogue, which was then a curacy in the parish, is still closely linked in folk memory with the 1798 Rising and Father John Murphy of Kilcormack. One of Laurence Comerford’s first tasks as the new parish priest was to rebuild the chapel of Boolavogue, which was set on fire on 27 May 1798 when John Murphy was curate.[28]

Laurence Comerford “laboured zealously until his retirement in 1816. He went to reside with his relatives in Adamstown.”[29] His successor as parish priest was the Revd Nicholas Codd, previously a curate in Enniscorthy.[30]

Father Laurence Comerford survived another 29 years, living in retirement in Adamstown. In his old age, he was totally blind and was led around the roads of Newbawn by his nephew. He had a reputation as a healer, and people came from far and near to visit him.[31] He died on 5 September 1847, in his 95th year.[32]

His inscribed tomb is in the old cemetery in Newbawn.[33]

Posted by Patrick Comerford at 21:35