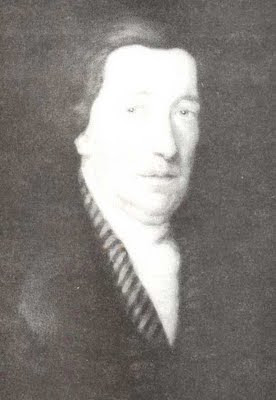 James Comerford (ca 1720-1808), of The Langton House, The Butterslip, Kilkenny, was one of the principals in the partnership of Comerford and Murray, which loaded the first and only boat to navigate the Kilkenny Canal from the tidewater to the city, and both he and his wife Anne were painted by the Kilkenny-born miniaturist, John Comerford (ca 1770-1832), when he was their guest in 1794, and were painted by him again in 1797 and 1808 [See Comerford Profiles 13: John Comerford (1770-1832), artist]. 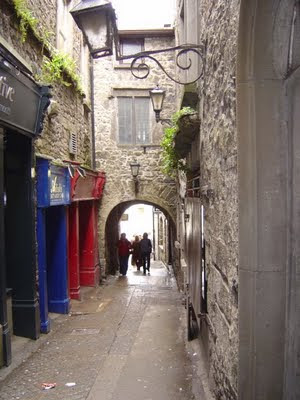 14.2: The Langton House in the Butterslip, Kilkenny; William Comerford moved there after his son James Comerford married Anne Langton in 1754 (Photograph © Patrick Comerford, 2007)

James was the son of William Comerford (ca 1692?-post 1765), of Kilkenny City, who claimed to be a member of the Ballybur branch of the family [see 4: Comerford of Ballybur Castle and Kilkenny City]. Barney Comerford says William and his father, Richard Comerford, lived at Coolgreany, Co Kilkenny; however, Prim and other authorities show William lived in Kilkenny City and moved to the Langton House at The Butterslip, Kilkenny, after the marriage of his son James to Anne Langton in 1754.

William’s grandson, Michael Comerford, later recalled how William took an oaken chest of title deeds with him to the Butterslip, and on sunny days would take them out and unfold them. These were believed by family members to be the title deeds to Ballybur; after his death, they were inherited by his elder son James Comerford, but are believed to have been destroyed by James Comerford’s wife, Anne.[1]

William Comerford, who was still alive some years after the birth of his grandson Michael Comerford in 1765, was the father of two, three, or perhaps even four sons:

Barney Comerford cites no sources when he says William was the father also of two further sons:

14.3: The Langton and Comerford house in The Butterslip, as illustrated in Graves and Carrigan

After their marriage, James and Anne Comerford lived in the Langton House in The Butterslip, off High Street, Kilkenny. There they continued her father’s business. The house is illustrated by the Revd James Graves in the Journal of the Royal Society of Antiquaries of Ireland, vol 8 (1864), by Canon William Carrigan (vol 3), and more recently by Anne Farrall in John Bradley’s Discover Kilkenny.[6] Until at least 1773, James and Anne Comerford continued to update her father’s pocketbook with details of family births, baptisms, marriages and deaths.[7]

Along with James Comerford’s father, William, other members of the extended family who live with James and Anne Comerford at The Butterslip, included Anne’s half-sister, Mary Fitzpatrick (daughter of Silvester Langton and his first wife, Anne Langton; she was born ca 1689 and died 18 March 1749, aged 60, and both are buried in Saint John’s, Kilkenny), and her first cousin, Margaret Langton (ca 1721-1774), daughter of Michael Langton fitzNicholas, who died in the house of a “dropsical complaint” on 15 February 1774, aged 52.[8]

Incidentally, Margaret’s brother, John Langton, who died of the smallpox at the age of two in 1717, was a godson of Catherine (Comerford) Nagle, sister of Joseph Comerford of Anglure [see Comerford Profiles 9: Joseph Comerford (d. 1729), Marquis d’Anglure].[9] [See Chapter 6: Comerford of Ballymack and Callan].In 1771 or 1772, as “Mr James Commerford,” he subscribed £5.13.9 towards building a new church on the site of the present Saint Mary’s Cathedral, Kilkenny. On 7 December 1775, James Comerford took the Test Oath along with Walter Butler, de jure 16th Earl of Ormond, the Revd Patrick Molloy of Saint Mary’s, and other leading Roman Catholic citizens s at the Tholsel in Kilkenny.[10] James Comerford formed the partnership of Comerford and Murray with his brother-in-law, Emmanuel Murray (1734-1802), husband of Anne’s sister, Eleanor Langton (born ca 1733/1734, married on 29 January 1774, died on 9 May 1772 aged 38, buried in Saint Mary’s). This partnership loaded the first and only boat that navigated the Kilkenny Canal from the tidewater to the city, and the vessel discharged its cargo at New Quay.[11] 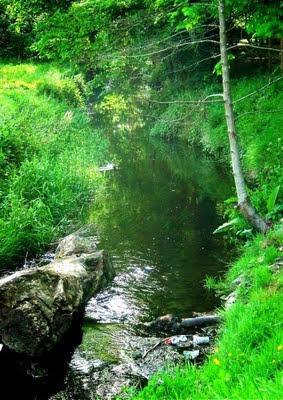 14.4: The disused canal in Kilkenny … Comerford and Murray loaded the first and only boat that navigated the Kilkenny Canal (Photograph © Patrick Comerford, 2007)

The failure, despite many efforts – including those of Comerford and Murray – to build a canal that would make the city accessible from the sea had an enduring impact on Kilkenny. It led to the development of rival market places, notably Bagenalstown, Co Carlow, on the River Barrow, and Clonmel, Co Tipperary, on the River Suir, from which it was cheaper to ship goods to Dublin and Waterford. By the late 1840s, when the railways arrived, most of Kilkenny’s industries were in decline.[12] 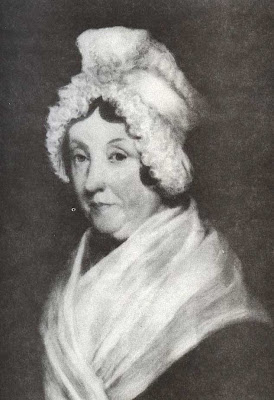 14.5: Anne (Langton) Comerford, from a portrait miniature by John Comerford

James died shortly after that third portrait was painted in 1808, for his will, as the will of James Cummerford of Knockanure, near Newtownbarry (Bunclody), Co Wexford, went to probate in Ferns Diocesan Court in 1809.[14]

14.6: The ‘Hole in the Wall’ stood on this site in Kilkenny … Judith Madden, the proprietor, was mother of Edmund Madden who married Jane Comerford in 1781 (Photograph © Patrick Comerford, 2007)

The fifth child of James and Anne Comerford, Michael Comerford (1764-1851), of King Street, Kilkenny,[46] was born in 1764. In 1771, at the age of seven, he saw the removal of the Market Cross in High Street, Kilkenny. He rented the Langton house in the Butterslip from his mother’s brother, Michael Langton of Danville.[47]

14.7: The Market Cross in High Street, Kilkenny … Michael Comerford witnessed its removal in 1764 as a seven-year-old

Prim records the people around Ballybur “always looked upon” him as “the lineal representative” of the Comerfords of Ballybur Castle.[48] He died unmarried on 20 April 1851 and was buried in Saint Mary’s Churchyard, Kilkenny. His executor was the Kilkenny writer, Michael Banim (1796-1864). Michael Comerford was also an uncle of Jeremiah Scully of Freshford, who inherited the great Irish seal of Charles I from one of the Ballybur title deeds.[49]

On the death of Michael Comerford in 1851, the Langton House in the Butterslip and the Comerford family portraits by John Comerford passed to his grand-nephew, Father Edmund Madden, who erected his gravestone.[50]

The family continued to be represented in the city through descendants in the female line in the Madden, Bourke, Dunne, Kenealy and Buggy families. But the death of Michael Comerford in 1851 brought to an end the connections with Kilkenny City of the male line of this branch of the Comerford family.

If William, Edward and Nicholas Comerford died in infancy, and if, as Prim suggests, the descendants of Sylvester Comerford died out at the death of Nicholas Comerford, then the representation of this line of the Comerford family of Ballybur passed in 1851 to the descendants of James Comerford’s brother Edmond Comerford and the senior member of the Comerford family of Newtownbarry (Bunclody), Co Wexford [See 8: Comerford of Bunclody and Dublin]. This appears to have been James Comerford (ca 1788/1789-1859) of Clohamon and Newtownbarry, Co Wexford, and Brown Street, Carlow, the father of Bishop Michael Comerford [See Comerford Profiles 16: Bishop Michael Comerford (1831-1895), bishop and historian]

To return to Patrick Comerford’s welcome page and the navigation aids, click here:http://comerfordfamily.blogspot.com/2007/12/welcome-to-comerford-family-history.html

Posted by Patrick Comerford at 21:31

I believe that "●● (The Revd) Canice Bourke, OFM Cap (1890-1969), a Capuchin Friar and author of Humility: the Foundation of the Spiritual Life (1951), later republished as The Power of Humility.[29]" is actually one and the same as my grand uncle Edward John Bourke. His mother was Catherine Walsh and his father was James Bourke (Worth Will Tell, High Street, Kilkenny). The shop had a back door onto the Butterslip just below the 'bridge'.

i would like to add to the story. my name is James Charles Hayburn, the son of James charles Hayburn. My father was born 8-11-1914 in San Francisco, and died 10-16-1976. My father was the brother of Mnsr. Robert F. Hayburn and Fr. Edmund Hayburn. My mother, Sherry Margaret Klobas, gave birth to me on December 31,1966, and to my brother John Charles Hayburn June 23,1968.I was born in Berkeley California. I grew up in Sebastopol California with my grandparents on my mothers side after my fathers death in 1976. My mother died in 1980. I now reside in Oakland California.