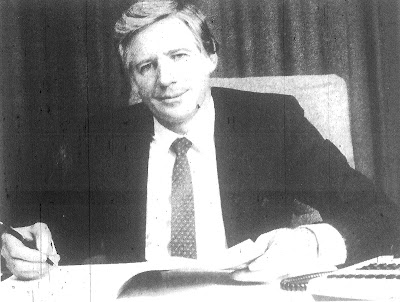 Chris Comerford, who was the managing director of the Irish Sugar Company from 1984 at a pivotal time, and played a controversial role in Greencore, the first state company privatisation in Ireland, that continued to overshadow his career into the 21st century.

Chris Comerford is originally from Kilmoganny, Co Kilkenny, and studied at University College, Dublin, where he graduated with an honours degree in agricultural science.

He has been involved in business management for most of his working life, and has held various positions including being chairman, managing director and chief executive of a number of companies in Ireland, Britain, the Channel Islands, and the US, including Greencore plc, Geest Ltd and Budgetts UK.

In 1991, the council of the Irish Management Institute elected him a fellow in recognition of his contribution to the practice of management.

After losing out to Philip Lynch for the top position at IAWS, he went on to become the managing director of the Irish Sugar Company from 1984 at a pivotal time in the company’s history.

The social function of the national sugar industry as a provider of jobs in key provincial centres was clashing with the Irish Government’s demands that the Sugar Company should become a more commercial concern.

Greencore was set up by the Irish Government in 1991 to take over the Irish Sugar Company. Comerford was the CEO of the new company, which was floated on the stock exchange – the first state company privatisation in Ireland.

Shortly afterwards, a dispute emerged over ownership of Talmino, a company based in Jersey, and a £2.1 million share of a Greencore acquisition. The dispute involved Comerford and several fellow Greencore executives, and led to Comerford leaving Greencore under a cloud in 1991.

An investigation began into his claims that he was the beneficial owner of Talmino, and that he was owed the £2.1 million from Greencore’s acquisition of Sugar Distributors.

The court-appointed inspectors decided that Chris Comerford’s claims were not justified Their report in March 1992 found that he had corruptly accepted payments that might constitute a bribe. Comerford claimed the report was unfair and, although it was sent to the Director of Public Porosecutions, no prosecution resulted. However, the Irish Government prevented Greencore from paying the loan note to Talmino when it came due.

After leaving Greencore plc, Chris Comerford was engaged in consulting work for the fruit importers and distributors Fyffes and other companies. In 1996, he was appointed the chief executive of Geest Ltd when Fyffes set up the 50:50 joint venture with Wibdeco, the Windward Islands banana company.

He retired from Geests in 2001, but more recently, he has run his own international management consultancy business.

He acted as the project manager for Fyffes during an epic court battle with DCC over allegations about €80 million worth of insider trading allegations. The case ran for years until it was finally settled in 2009, with Chris Comerford frequently attending the court proceedings.

In May 2010, he was appointed to the board of US Oil and Gas plc, an exploration company with assets in Nye County, Nevada. The 77-year-old, who now lives on Ailesbury Road, in Ballsbridge, Dublin 4, has also been running his own international management consultancy business.

Posted by Patrick Comerford at 10:00

I'm trying to contact a relative of Alice Comerford (1844-1939) of Kilmoganny, Co Kilkenny, who emigrated to Australia and married Albert Bossence of Victoria. She was the mother of the WW1 hero, Fr Ignatius Bossence M.C. (1886-1969) who left behind him a bequest of about $650,000 which is still unspent.