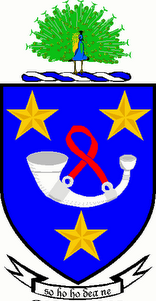 The earliest representations of Comerford coats-of-arms are found in the churchyard of Saint Mary’s, Callan. The tomb of Gerald Comerford of Castleinch, dated 1604, shows a bugle horn, stringed, between three pierced six-pointed mullets.

This may be a minor variation on the arms generally associated with the Comerfords of Ireland: Azure, a bugle horn argent stringed gules, between three mullets or (A field of blue, charged with a silver bugle horn dressed with red strings and placed between three golden stars.

However, contact with the Comberford family of Comberford, Tamworth and Lichfield, eventually led to the adoption of their heraldic emblems in the early decades of the 17th century by members of the Comerford family, including the original Comberford arms (Gules, a talbot passant argent, a red field charged with a white walking dog; and Gules, a cross engrailed or charged with five roses of the field, a red field charged with a golden cross that bears five red roses, one on each arm of the cross and one in the centre).

The monument of Thomas Comerford in Callan shows these two Comberford arms quartered, and impaling the Shee arms, with the Comberford crest of a peacock’s head emerging from a coronet.

Patrick Comerford, at the time of his consecration as Bishop of Waterford and Lismore, also adopted as his episcopal coat-of-arms a display using the Talbot, red rose and cross of the Comberford arms from Staffordshire. This may have been less of an attempt to identify with the Staffordshire Comberfords as prominent English Roman Catholic recusants than an attempt to identify the Comerfords of Ireland with the Comberford family who had achieved new prominence in English Catholic society with the building of the Moat House in Staffordshire where Prince Charles, the future Charles I, was their guest, and where the long gallery was decorated in a grand heraldic statement of the Comberfords’ genealogical links with their royal guest. 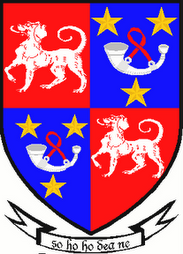 The Comerfords of Ballybur and Danganmore are recorded as quartering the arms of the Comberford family of Comberford in the first and fourth quarter, and the arms of the Comerfords of Ireland in the second and third quarter: Quarterly 1 and 4: Gules, a talbot passant argent. 2 and 3: Azure, a bugle horn argent stringed gules between three mullets or.[1] In addition, they adapted the Comberfords’ crest as their own: Out of a ducal coronet or, a peacock’s head proper.[2] For a motto they used: So ho ho dea ne.[3] This motto evades translation, and its meaning and significance have been lost, although James Comerford later tried to explain it in 1902 (see below).

However, the Ryan family and later the Langton family of Danganmore, when they quartered the Comerford arms used only the blue shield with the silver, re-stringed bugle horn placed between three golden stars.[4]

The Comerford family of New Ross, Co Wexford, is said to have continued to use the original arms of the Irish family: Azure, a bugle horn argent, stringed gules, between three mullets or.[5] However, they did adopt the Comberford peacock crest to their own style (Crest: A peacock in its pride proper),[6] and also used the motto: So ho ho dea ne. 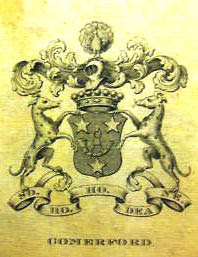 The Comerford arms, embellished in a book plate used by Bert Comerford of Lancaster County, Pennsylvania

In 1862, the Revd William Russell Blackett of Liverpool, formerly of Pilltown, Co Kilkenny, recorded the monument of Philip Quemerford or Comerford (died 1630) and his wife Margaret Shee at Ballyneale near Carrick-on-Suir. This was an altar tomb with a coat of arms: Quarterly 1 and 4 (recte 1 and 4 or 2 and 3) four roses on a cross (recte five roses on a cross engrailed); 2 and 4 (recte 1 and 4 or 2 and 3) a lion passant (recte talbot passant), impaling the six quarters of the Shee family.[7]

The quartering of the Comberford (Staffordshire) arms (gules, a talbot passant argent) with the Comerford arms (azure, a bugle horn argent, stringed gules, between three mullets or) was popularised in the 19th century by the Victorian antiquarian and book collector, James Comerford, JP, FSA (1806-1881), whose heraldic bookplates, with the motto So Ho Ho Dea Ne, remain collector’s items.

James Comerford practised as a notary with T.S. Girdler as Comerford and Company at 27 Change Alley, Cornhill, and later at 7 Tokenhouse Yard, London. As a book collector and antiquarian, he amassed a library that included a large collection of county histories, local topographies and books of Catholic religious piety that was auctioned for £8,372 13 s by Sotheby’s after his death on 8 March 1881. His heraldic bookplates set the standard for the Comerford entries in Burke’s Armory, which was published three years later in 1884.[8]

The Comberford coat-of-arms showing the Comberford talbot quartering the cross charged with five red roses was used by James Comerford from Ireland as an illustration and as a bookmark affixed to his slim volume, Some Records of the Comerford family collected by a descendant, written at the beginning of the 20th century, privately printed and later bound on 26 November 1902 .[9] The arms used in this small publication are: Quarterly, 1 and 4, gules, a talbot passant argent; 2 and 3, gules, a cross engrailed or, charged with five roses of the first. Crest: out of a ducal coronet or, a peacock’s head proper. Motto: So Ho Ho Dea Ne.

The coat-of-arms used in the small publication by James Comerford (Photograph: Patrick Comerford 2009)

In a caption on page 7, James Comerford describes these as “The arms of the Comerford [sic] family, shewing the Staffordshire and Warwickshire branches quartered.” However, the crest is slightly different: instead of using the Comberford crest of a peacock’s head per pale or and gules, charged with six roses counter-charged, the peacock’s head is in its natural colours.

The author claims the motto is “an old Norman-French hunting cry.” He writes:

“‘Ho’ is still used in England in coursing when beating for hares. The person who first spies the hare sitting in her form cries out ‘So Ho.’ ‘Dea Ne’ originally one word, and in recent years spelled ‘Diane,’ is an old Norman-French word still in use in France, and is found in the Academy Dictionary, and the meaning given is ‘Bruit de Chasse’.” .[10]

I conclude elsewhere [Comberford 2: Comerford and Comberford, ties of kinship and affection] that the author of this slim volume was James Comerford from Bunclody, Co Wexford, who died at 11 Upper Beechwood Avenue on 14 December 1902 [see Comerford 8: Comerford of Bunclody and Dublin].

Another version of their arms was: Quarterly: 1, gules, a talbot passant argent; 2 and 3, azure, a coronet argent, stringed gules, between three mullets or; 4, gules, a cross engrailed or, charged with five roses of the field. These arms were crowned with a baron’s coronet, and a peacock’s head for a crest.

The supporters were described as two tigers, although this may properly have been the two Irish wolfhounds used by Joseph Comerford as his supporters. Motto: So, ho, Dea, ne.[12]

Quarterly, 1: gules, a Talbot passant argent; 2 and 3, azure, a bugle horn argent between three mullets or, two in chief and one in base; 4, gules, a cross engrailed or charged with five roses of the field. Impaling: Azure, fretté d’or, a chief of the first charges with two mullets of the second.

The Comerford-Casey family of Cork and England used a coat-of-arms that incorporated both the talbot of the Comberfords of Staffordshire and the bugle horn of the Comerfords of south-east Ireland: Arms: Azure, on a chevron argent between three eagles’ heads erased or, a talbot passant gules. Crest: Out of a ducal coronet or, a demi-eagle displayed proper, charged on the breast with a bugle-horn stringed or. Motto: O Cathasaigh cloidhimhdeirge.[14]

Posted by Patrick Comerford at 13:39

Did not expect this when I was looking up the Comiskey motto.

I went to the 700 year anniversary of William Wallace and saw a man saying he could give the ansenctry of the name McCumisky and this is what came up, so didn't think anything would be found,maybe I will look up more information and hopefully visit your beautiful country, love from Scitland