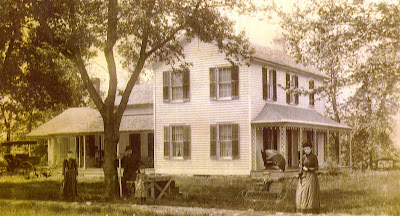 A Comerford family with origins in Co Wexford has been intimately involved in the founding and later history of Minooka in Illinois, a town 65 miles outside Chicago. Minooka was originally home to the Potowatomie Indians, who first lived in the surrounding area.[1]

Minooka dates back from 1852 when the Chicago, Rock Island and Peoria Railroads came through the area on the recommendation of surveyor, Ransom Gardner. George Comerford, an Irish immigrant from Co Wexford and railroad surveyor helped bring the railroad to Minooka. Gardner and Comerford bought land in the area for the railroad, and George Comerford became the first agent at the Minooka Depot. He also was instrumental in establishing a post office in 1853 and was its postmaster for nine years.

When Minooka was incorporated in 1869, there were three grocery and liquor stores, a post office, a grain elevator and two churches – Saint Mary’s Catholic Church and the United Methodist Church, both built with support from George Comerford.

PIERCE COMERFORD, of Co Wexford is the immediate, direct ancestor of this branch of the Comerford family that emigrated to the United States in the mid 19th century and settled in Minooka, Illinois. He may have been born ca 1769/1770. He married ... and was the father of:

William and Nancy Comerford were the parents of five sons and two daughters who were born in Co Wexford:

George Comerford was a railroad pioneer in Illinois who is credited with bringing the railroad to Minooka, which came into existence in 1852 when the railroad came through the area. George surveyed the Rockford and Rock Island Railroad, and settled in Minooka, Illinois, where he was rail agent, postmaster and merchant. He was instrumental in establishing the Minooka post office in 1853, and served as its postmaster for nine years. The village of Minooka was incorporated on 27 March 1869.

George Comerford was also involved in building the Chicago, Rock Island and Peoria Line and became the first agent at the Minooka Depot. He built the Comerford Block in Minooka, helped build both the Catholic and Methodist churches, farmed 160 acres, and was President of the Board of Education. He was a Democrat in his politics. He returned to visit his native Co Wexford ca 1882.

George and Catherine Comerford were the parents of two sons and a daughter:

The eldest son of George and Catherine Comerford was:

THOMAS S COMERFORD (1860-1925), farmer and postmaster, of Minooka, Illinois, and 113 D’Arcy Avenue, Joliet, Illinois. He was born on 7 March 1860 in Minooka. He was postmaster at Minooka, and lived there until 1920, when he moved to Joliet. He was educated at Notre Dame University. In 1885, he married Margaret Ellen Coulehan, daughter of Lawrence Coulehan (1820-1882) and Margaret (née Welch), who originally came from Co Offaly, and moved to Grundy County, Illinois. Margaret (Coulehan) Comerford died on 31 December 1910 aged 48; Thomas Comerford died on 20 August 1925, aged 65, and was buried in Saint Mary’s Cemetery, Minooka. They had eight children, three sons and five daughters:

The third son and youngest child of Thomas S Comerford was:

The third son and fourth child of William and Nancy Comerford (above) was:

CHARLES COMERFORD (1832-1902). He was born in 1832. He married Bridget Neville (1838-1918), who was born in Ireland. They are buried in Mount Carmel Cemetery, Morris, Grundy County, Illinois, United States. They were the parents of eight children, six daughters and two sons:

Posted by Patrick Comerford at 20:48

I have been trying to find my Great Great Grandfather Thomas Commeford’s parents or any relative that may know the family. I know that he was born in Kilkenny County, Ireland in January 1842. He left Ireland and went to Liverpool, England in about 1858. From there, he landed in New York Port, New York State, U.S.A. The next time I have him recorded as being in the State of Illinois in 1860. He joined the Illinois Volunteers and entered the American Civil War. The Military Records show no next of kin or parents. From what I understand, most of the Census Records of Ireland have been destroyed from the wars in that country. I have been looking at some of the Roman Catholic Parish Record from Ireland that were on microfilm, in the hope that I can find a Thomas Commeford, Commerford, Comeford, Comerford, in the same time frame as his date of birth. As of yet, I have not had any success. Can you help me?