Comberford 11: Wednesbury and the Comberford family 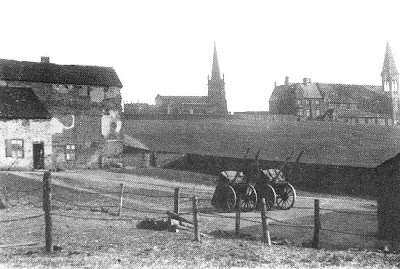 Wednesbury Manor ... the remains of the manor house seen in an old postcard in 1892

The heraldic family trees on the ceiling of the Long Gallery in the Moat House, Tamworth [See Comberford 5: Recusants, royal guests and civil war], illustrate the importance William Comberford and his family attached to their descent from the Beaumont family, through which they inherited their estates in Wednesbury.

Through the marriage of Humphrey Comberford and Dorothy Beaumont, the Comberford family acquired an interest in the Wednesbury estates. However, Dorothy was one of three daughters and co-heiresses, and her other two sisters had married brothers from the Babington family. By acquiring the interests of the Babington family, the Comberfords arrested the possibility that the estates would be divided, and placed themselves in a position to exploit the new-found wealth in coal mining in south Staffordshire.

The marriage also strengthened the links between the Comberford family and many of the prominent Catholic families in south Staffordshire. These links, and the safe passage of Catholic priests during the reign of Elizabeth I, were facilitated, in part, by the fact that the Moat House in Tamworth and the Comberford manor in Wednesbury were linked directly by the River Tame.

In addition, by emphasising their descent from the Beaumont family, later generations in the Comberford family claimed a certain social cachet, claiming kinship with French, Scottish and English royalty, and, perhaps, securing a prominent place during the visit of James I and his son Prince Charles to Tamworth in August 1619, when the Prince of Wales stayed overnight at the Moat House as a guest of William Comberford. The Comberfords had risen from the ranks of the local farming families to claiming a place among the gentry. If they ever entertained any hopes of receiving a title, these never materialised, but when the prince succeeded to the throne as Charles I, he built on these claims to his own benefit, using William Comberford to raise loans and troops for the royalist cause during the English Civil War. 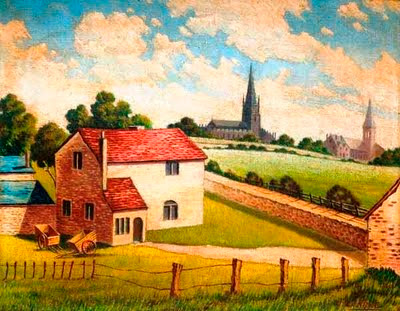 A modern artistic impression of Wednesbury Manor ... a painting by D. Clarke now in the Sandwell Museums

According to the local historian, William Hackwood, who lived at Comberford Cottage in Bridge Street, Wednesbury, Colonel William Comberford probably sold Wednesbury Manor in 1642 to raise money for the Royalist cause [See Comberford 5: Recusants, royal guests and civil war ].[3] It first passed to a Parliamentarian named Gilpin. Between 1657 and 1663 the manor was sold to John Shelton of West Bromwich, a Cromwellian and strict Presbyterian. Shelton had already bought property in the Wednesbury area from John Comberford of Handsworth. Shelton was Sheriff of Staffordshire in 1672.[4]

Wednesbury Hall was sold in 1710 by Shelton’s son, John Shelton, to John Hoo of Bradley, serjeant-at-law, and it then passed to his brother, Thomas Hoo, to Thomas Hoo’s son, John Hoo, who died at the old house in Wednesbury in 1740, and to John Hoo’s sons, John Hoo (1718-1746) and Thomas Hoo, High Sheriff of Staffordshire in 1772 and who died in 1794. Wednesbury Hall was used as a farmhouse, but it deteriorated when it was the home of the Hoo family in the early 18th century.[5] The top storey of the old manor house was removed about 1755, and it was soon reduced to “a common farm[house],” so that Shaw in 1779, in his History and Antiquities of Staffordshire, says the manor house at Wednesbury “has nothing remarkable about it, now being converted into a common farm.”

These two women were “the present ladies of the manor” at the end of the 18th century. Wednesbury then passed to Sir Joseph Scott (1752-1828), when he married Margaret Whitby, the only daughter of Edward and Mary Whitby and one of the two Hoo heiresses. A local vicar, the Revd John Wylde, contested this succession and produced a will dated 1777 naming himself as the chief beneficiary. When the case was heard at Stafford Assizes in 1792, a papermaker proved beyond doubt that the will produced by Wylde was a fake and was on paper made after Thomas Hoo’s death. Scott inherited Wednesbury Hall and was made a baronet in 1806. He was still in possession of Wednesbury Hall in 1820, and died on 17 June 1828. His son, Sir Edward Dolman Scott (1793-1851), was MP for Lichfield.[6]

The coal-mining interests of the Comberford and Parkes families passed in the 17th century to the daughters of Richard Parkes of Old Park. In 1727, Sarah married Sampson Lloyd, a leading Quaker whose descendants gave their name to Lloyds Bank. Sarah’s sister married Thomas Pemberton, whose descendants also married into the Lloyd family.[7]

By 1834, Wednesbury Hall was in the possession of Sir Horace St Paul (1775-1840), a baronet and a count of the Holy Roman Empire, and the house was described as “a venerable brick mansion.” Wednesbury Hall was inherited by his son, Sir Horace St Paul (1812-1891) in 1840. However, by the time Bagnall published his History of Wednesbury in 1854, the manor house had been converted into a farmhouse, “retaining nothing of its former magnificence.” Wednesbury Manor House remained a farmhouse until the late 19th century. FW Hackwood, who saw the house in its later years, described it in his book Wednesbury Ancient and Modern: “small red bricks, heavy sandstone mullioned windows, very plain but somewhat high. Its open entrance porch had a seat on each side.”

Wednesbury Hall was later known as Mason’s Hall, and the manor house was in slum conditions by the mid-19th century. It was only the size of a cottage when it was photographed in 1894, and it was completely demolished at the beginning of the 20th century.[8]

However, the name of the Manor House has also been used since the 1960s by a public house on Hall Green Road, Wednesbury. The Manor House is a magnificent timber beamed property dating back to 1230 and was extended and added to during the 15th and 16th centuries. Surrounded by a moat, thought to be date from the original building, this house remained a private residence until the 1880s, when it was concealed behind modern brickwork and split into flats. Tragically, it was run down and derelict by the 1950s. 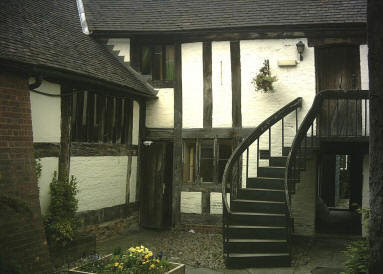 The interior of the Manor House, Hall Green Road, Wednesbury

However on clearing local slums, the original building was discovered and thankfully restored to its former glory. It has been a pub and restaurant since the 1960s, although it was temporarily closed in late 2009.

Posted by Patrick Comerford at 12:59