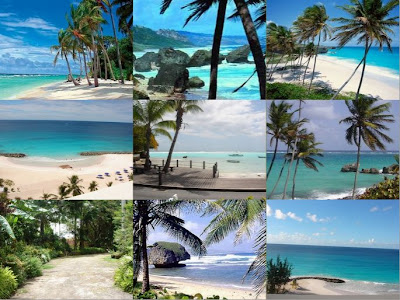 Barbados, a collection of photographs from Wikipedia … but it was no Caribbean holiday island for Nicholas Commerford and other slaves transported there in the 17th century

Nicholas Commerford, who was sentenced to death in Kilkenny at the age of 12 in 1665 for burglary, was left awaiting execution in cruel conditions on death row for over two years before his pleas were eventually heard by the Duke of Ormond and his sentence was commuted to deportation to Barbados in 1667.

We do not know whether Nicholas Commerford, described at the time of his appeal as ‘a poore prisoner,’ ever survived his ordeals, or whether he ever managed to return to Ireland. But his case provides interesting insights into the harsh penal regime of the 17th century, and draws attention to the plight of the many thousands of Irish prisoners who were deported to the Caribbean islands about this time and ended their days in hard labour.

When Nicholas was still a boy of only 12, it appears from the records of his appeal against his death sentence, he was convicted of burglary in a court in Kilkenny in March 1665. He was sentenced to death by the judges, John Povery, who was one of the Barons of the Court of Exchequer, and Peter Goodwin, who was then Mayor of Kilkenny and a Justice of the Peace.[1]

However, carrying out the death sentence was delayed because Nicholas was a minor, and because, it was argued, his crime had been instigated by others. It was also said that he was ‘a very simple and innocent boy.’ [2]

Nicholas spent two and a half years in jail after that, and would claim that while in prison he endured ‘so much hunger, thirst and disease,’ that he faced certain death. Appealing his sentence to Ormond in August 1667, he said that several people had offered ‘to take him into service.’ In his petition, he asked Ormond to grant him a pardon in forma pauperis. [3]

In an order issued at Kilkenny Castle on 28 August 1667, Ormond asked the judges who had tried young Nicholas Commerford to give details of the trial, evidence and conviction, and to offer their opinion as to whether he should ‘be an object his Majestie’s mercy.’ [4]

In his reply, the magistrate, Goodwin, said that Commerford was of ‘minor age’ and had been ‘prompted thereunto by others, beeing a very simple and innocent boy.’ [5]

And so, at Kilkenny on 4 September 1667, Comerford’s death sentence was commuted to being shipped to Barbados, with a stipulation that he was not to return to Ireland without licence. [6]

Although indentured servitude was not slavery, the experience of deportation to the Caribbean was cruel and debasing. Although many Irish gentry and merchants – both Catholic and Protestant – had become planters in the Caribbean, the majority of the Irish who arrived there in the 17th century were sent as bonded labour. These ‘political transportees’ were sent to Barbados and Jamaica as well as to the Leeward Islands.[7]

Barbados was the Stuarts’ most valuable Caribbean colony, first producing tobacco, then in the 1640s switching to sugar. In their search for labour, the sugar planters bought up indentures for white servants and imported enslaved Africans. Discontent was so rife by the middle of the century that there was a servant revolt in Barbados in 1647. The ringleaders were hanged, but no particular part was played by the Irish. [8]

From 1652 until 1659 alone, it is estimated that well over 50,000 men, women, and children of Irish descent were forcibly transported to the British colonies in Barbados and Virginia to serve in the plantation economy.[9]

Rodgers says it is difficult if not impossible to calculate how many white servants (bonded and free) reached Barbados in the 17th century or what proportion of them was Irish, although it may be over 50 per cent. In 1667, the year Nicholas Commerford’s deportation to Barbados was ordered, Governor Willoughby was worried because he believed that more than half of the 4,000-strong Barbadian militia was Irish, and there may have been more Irish servants on Barbados than on Montserrat. [10]

The extent to which white prisoners were transported to Barbados was so great, that by 1701, there were about 25,000 slaves on the island’s plantations, and about 21,700 indentured or bonded labourers of European descent.[11]

Later, as the African slave trade expanded and flourished, the Irish population of Barbados drastically receded over time. Many of them had been worked to death early on in their arrival in Barbados; the descendants of those who survived intermarried with the black slaves and their descendants. The story of Nicholas Commerford and his trial and deportation to Barbados is a heart-gripping reminder of those cruel days.