12.1: The Comberford arms allowed at the Visitation of Staffordshire in 1662 show gules, a talbot passant argent (red, a white walking dog), and can still be seen on the ceiling of the grand gallery in the Moat House, Tamworth (Photograph: Patrick Comerford, 2007)

In the late 16th century, Sampson Erdeswicke recorded the Comberford arms as gules, a talbot passant argent (12.2, right)[1] – a red shield displaying a white walking dog or talbot. Two hundred years later, Stebbing Shaw stated that these Comberford arms – gules, a talbot passant argent – dated from the 14th century and that they first appeared on the seals of the Comberford family during the reign of Edward III (1327-1377).[2] However, the use of the talbot may be much later, perhaps adopted by William Comberford while he worked as a lawyer for John Talbot, 1st Earl of Shrewsbury, in the mid-15th century.

Similar arms, but with the colours reversed, were used by two neighbouring families in Staffordshire, the Strethay family of Lichfield (argent, a lymmer hound gules),[3] and the Wolseley family of Wolseley (argent, a talbot passant gules).[4] The connections with the Streethay and Wolseley families are easily explained. In 1460, William Comberford and his wife Anne extended their land holdings when they acquired almost 200 acres in Lichfield, Longdon, the lost hamlet of Morughale, south-west of Streethay, Curborough, Streethay, King’s Bromley and Elmhurst [see Comberford 3: The early Comberford family]. [5] Humphrey Comberford’s father-in-law, John Beaumont of Wednesbury, was a half-brother of Elizabeth (or Anne) Stanley of Hammerwich, near Lichfield, who married John de Wolseley [see Comberford 4: Comberford wealth from Wednesbury]. 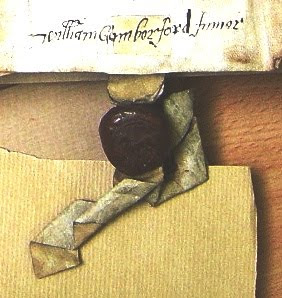 William Comberford of Tamworth and his brothers, John Comberford and Thomas Comberford signed a lease signed on which they used their seals, giving the first surviving evidence of Comberford heraldic bearings. The seals of Thomas and John are now missing from this document, but William Comberford’s seal clearly shows a talbot passant, although it is described in the Lichfield Record Office catalogue as “a horse running to the left” [see Comberford 5: Recusants, royal guests and civil war] [6]

Some years later, their father, William Comberford of Comberford, was among those summoned by Richard St George, Norroy King of Arms, during the Visitation of Staffordshire in August 1614,[7] when the heralds recorded gules a talbot passant argent as the arms for Comberford.[8] However, a list of those summoned to appear before Glover Somerset to record their descent and arms included Will’us Comberford de Comberford gen., whose arms were noted as “Gules, on a cross engrailed or, four (sic) roses of the field.”[9]

Prior to the Visitation, William Comberford may have been inspired by the pedigrees drafted two decades earlier by Sampson Erdeswick and William’s cousin and Sampson Erdeswick’s assistant, the herald William Wyrley, when he rediscovered the heraldic significance of the marriage of his ancestors John Comberford and Johanna Parles in the late 15th century. This provided the Comberford family with a curious if spurious opportunity to display its historic loyalty to the Lancastrian cause.

The Parles coat-of-arms, with five red roses, was assumed by the Comberford family, perhaps as a demonstration of their fervour for the Lancastrian cause and, by association, their loyalty to both James I and Charles I despite their past Catholicism, in time for the royal visit to Tamworth in 1619. 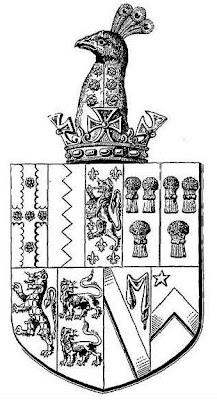 12.4: The quartered arms allowed to William Comberford at the Visitation of Warwickshire in 1619

At the Visitation of Warwickshire in 1619, the heralds allowed William Comberford to use the Parles arms of five red roses on a golden engrailed cross with a red background, and to quarter these with eight other arms: Edgerbaston (sic) (per pale indented or and azure), Beaumont (semee of fleur de lis, a lion rampant), Cumming (gules, three garbs argent), Chester (azure, three garbs or), Everingham (gules, a lion rampant vair), Heronville or Hanville (sable, two lions passant regardant in pale argent), Tynmore or Tinmare (vert, a bend or, in sinister chief a maunch sable) and Stafford (or, a chevron and in dexter chief a mullet gules).[10]

There is no independent evidence to explain why William Comberford was allowed to include the differenced Stafford arms in his quarterings.

In 1619, for the first time, we also come across the family’s use of a peacock’s head as a crest; the peacock’s head coming out of a golden ducal coronet, the head itself half golden and half red, each side charged with three roses of the opposite colour (out of a coronet or, a peacock’s head per pale or and gules charged with six roses in pale counter-charged).[11]

William Comberford’s lavish heraldic decoration of the long gallery on the first floor of the Moat House in 1619 may have been assisted by the researches of his first cousin, the herald William Wyrley (1565-1618), who was appointed Rouge Croix Pursuivant in 1604. The archives of the Society of Antiquaries in London include a late 16th century folio manuscript, ‘William Wyrley his booke,’[13] with pedigrees, heraldic and church notes compiled by Wyrley in Staffordshire in the late 16th century. There are family pedigrees throughout the folio, with excerpts from charters, including pedigrees for the families of Wyrley in 1592,[14] Comberford and Heronville,[15] and an autograph letter from the antiquarian Sampson Erdeswick, who was Wyrley’s mentor, to William Comberford, dated 12 January 1593/1594, relating to the families of Comberford and Heronville.[16]

1, Gules, a talbot statant (or passant according to Shaw) argent (Comberford);
2, Per pale indented or (or argent according to Shaw) and azure, in dexter chief an escallop gules, (Edgbaston, although Shaw says Parles);
3, Gules, on a cross engrailed or, five roses of the field (Shaw reads this as five Catherine wheels of the first), (Parles, although Shaw says Comberford);
4, Azure, semée de lis, a lion rampant or (Shaw says a lion rampant semée de lis or), (Beaumont);
5, Argent, a bend componée gules and sable, cottised of the second (Shaw says argent, on a bend cotised gules, three bars azure), (Leventhorpe);
6, Sable, two lions passant argent, crowned or (Heronville).
Crest: Issuing out of a ducal coronet a peacock’s head, mantled gules, doubled or, powdered with roses gules.[17]

William Comberford decorated the ceiling on the new extended gallery in Moat House with new plasterwork painted with rows of heraldic shields outlining genealogical tables that illustrated the royal descent of the Comberford family.[18] [The pattern of this elaborate decoration is outlined in Comberford 5: Recusants, royal guests and civil war].

During William Dugdale’s Visitation of Staffordshire in 1663, Robert Comberford, then aged 69, attested the Comberford family tree in Lichfield on 30 March 1663. No heraldic arms were recorded, and the visitation notes had a blank shield with the words over it stating: “See in old visit.” This referred to the arms recorded in the Visitation of Staffordshire in 1614, when the arms recorded for William Comberford were:[19]

Crest: In a ducal coronet gules, a peacock’s head per pale or and of the first [gules], the or charged with three roses in pale also of the first.

Once again, in the illustration, the talbot is how as standing rather than walking.

Other versions record the crest as: Out of a ducal coronet or, a peacock’s head per pale or and gules, charged with six roses counter-charged. 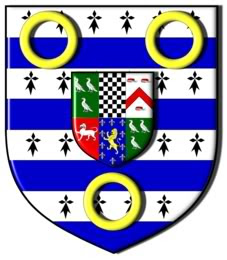 12.5: The arms of Thomas Harries, with the Comberford arms in the fourth quarter of pretence

Barry of eight ermine and azure, three annulets or (Harries); in pretence: 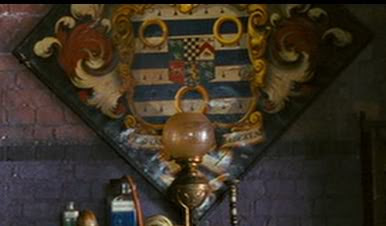 12.6: The hatchment of Thomas Harries, with the Comberford arms in the fourth quartering of pretence

Thomas Harries’s hatchment with these arms features in the film Nanny McPhee (2005) starring Emma Thompson, was supplied by J.C. Farley’s of Acton, who provide props to television and film companies.

The earliest recorded arms of the Comerford family of Co Kilkenny are: Azure a bugle horn argent stringed gules between three mullets or. These arms bear an interesting similarity to the arms of the Tamhorne family of Tamhorne near Comberford: Argent, a bugle horn between three escallops sable.[20] Erdeswick also records three stringed bugle horns on a blue field as an alternative bearing for the Wyrley family.[21] 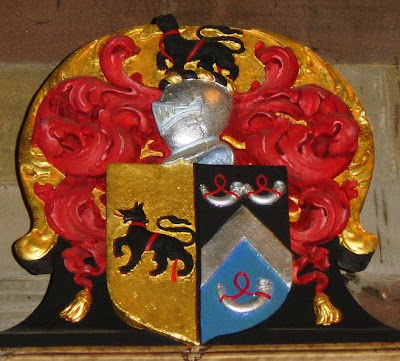 The Dorrington family, whose members included Dorothy Dorrington, wife of Sir Richard Dyott of Lichfield, bore “sable, three bugle horns argent stringed gules.”[22] On Sir Richard Dyott’s monument in Saint Mary’s Church, Lichfield, the Dorrington arms are displayed as: Per chevron sable and azure, a chevron argent between three bugle horns of the last, stringed gules (see photograph above). However, these connections appear to have been too late to have influenced the adoption of a bugle horn on the arms of the Comerford family of Co Kilkenny.

Posted by Patrick Comerford at 12:45