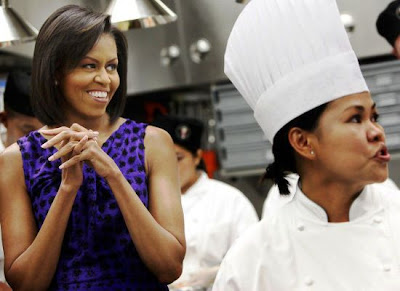 Cristeta Comerford was born Cristeta Pasia in Manila in The Philippines, in 1962. She is the second youngest child of Honesto and Erlinda Pasia, an elementary school principal and dressmaker. She grew up in the district of Sampaloc, Manila, close to the University of Santo Tomas.

From Manila Science High School, she went on to the University of the Philippines, Diliman in Quezon City, where she studied food technology. However, she left college before finishing her degree and emigrated to the US at the age of 23.

Her first position in the US was at the Sheraton Hotel near O’Hare International Airport, Chicago, and she also worked at the Hyatt Regency Hotel. From Chicago, she moved to Washington, DC, where she worked as a chef at two restaurants. She also spent six months in Austria, working in Vienna as a rotating chef.

Comerford was recruited by the executive chef, Walter Scheib III, in 1995 to work in the Clinton White House.

On 9 January 2009, the Obama transition team announced that Cristeta Comerford would be retained as the administration’s head chef. Michele Obama said: “Also the mom of a young daughter, I appreciate our shared perspective on the importance of healthy eating and healthy families.”

Cristeta Comerford lives in Columbia, Maryland, with her husband, John Comerford, and their daughter, Danielle.

Posted by Patrick Comerford at 17:51