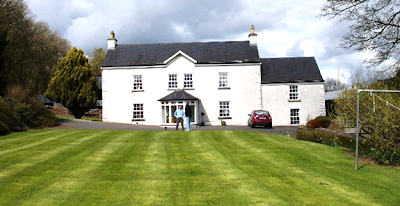 Coolgreany House, near Castlewarren, Co Kilkenny, built in 1653, and said to have been the home of Richard Comerford and his son William Comerford

According to the late Pierce Comerford (1944-2010), right,Coolgreaney House, near Castlewarren, Co Kilkenny was built in 1653 and has been home to his branch of the Comerford family for eight generations.

Coolgreaney House sits in a beautiful setting in north Co Kilkenny, surrounded by a grove of trees that were planted by earlier generations of the family, including one tree said to have been grown from a seed brought back in his pocket from America by one family member.

William Comerford’s grandson, Michael Comerford, later recalled how William took an oaken chest of title deeds with him to the Butterslip, and on sunny days would take them out and unfold them. These were believed by family members to be the title deeds to Ballybur; after his death, they were inherited by his elder son James Comerford, but are believed to have been destroyed by James Comerford’s wife, Anne. 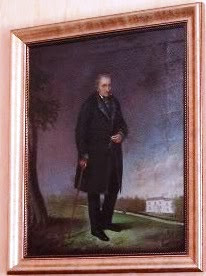 Pierce’s grandfather, also named Pierce Comerford (born ca 1874), was working in Arnott’s in 1898 when he was selected to play on the Arnott’s Dublin team that won the All-Ireland Football final that year. The medal was presented in 1899 and remained in the possession of Pierce Comerford of Coolgreaney House a century later.

Pierce Comerford the footballer later returned to Co Kilkenny and married Mary (Molly) Hogan. They were living at Coolgreany House at the time of the 1911 Census, when he was aged 37, Mary was 35, and they had one son and one daughter; Mary (3) and Thomas Comerford (2).

Pierce described his paternal grandmother, Molly Hogan, as a resourceful woman who looked after the workers well, and who would carry eggs to Dublin in her Morris Minor for sale. Pierce’s mother nursed in England during the war years.

When he finished his education, Pierce Comerford emigrated to Canada. But because of his father’s ill health, he returned home after a year to take care of his home place.

Pierce Comerford died at Coolgreany House on 7 February 2010 after a long illness bravely borne. He was survived by his wife Breda, his son, Ian Comerford, and four daughters, Claire, Ruth, Ciara and Valerie, his brother Jimmy Comerford, his son-in-law, brothers-in-law, uncles, aunts, and an extended family. After his funeral mass in Castlewarren Church, he was buried in the adjoining cemetery.

Posted by Patrick Comerford at 08:30