Comberford 2: Comerford and Comberford,
ties of kinship and affection

The Comerford family in Ireland claimed kinship with the Comberford family of Staffordshire from, perhaps, the early 17th century, if not from an earlier period. By the 18th century, the Irish genealogist, Sir William Betham, was accepting the claims that the Comerford family in Ireland was of Norman origin, coming to England with William the Conqueror in 1066, and then to Ireland in 1189. In an account which had wide currency in the 18th and 19th century, Betham, who was Ulster King of Arms, and the later Victorian genealogist Blake Forster, claimed:

“Amongst the chivalrous and bold warriors (all of whom were not Normans) who accompanied William II, second reigning Duke of Normandy, surnamed the Conqueror, in his invasion of England, A.D. 1066, was Sir Fulco de Comerford, under whose azure banner, on which was emblazoned three mullets or, fought twenty men-at-arms, and four hundred knights of kindred to himself. After the conquest Sir Fulco received a grant of several lordships from William the Conqueror, and from him descended De Comerford [sic] of Staffordshire ... A younger brother of De Comerford of Stafford, Sir Henry de Comerford, and his nephew Sir Fulco de Comerford, came over to Ireland with Prince John, son of Henry II, King of England with the Earl of Montaigne, but his uncle, Sir Henry de Comerford, remained in Ireland, marrying a niece of the powerful Sir Hugo de Lacy, Governor of Ireland in 1172, became possessed of considerable property, and was ancestor of the Comerford family; according to an ancient vellum Ms, “Hee was ane gudely knyghte, and ancesture of ye Comerfords, Barons of Dangeanmor.”[1]

This account was accepted with variations by many 19th century Irish historians and genealogists,[2] including John G.A. Prim, who perpetuated the claims that the Comerfords of Kilkenny originated in Staffordshire.[3]

The Comberford family, which took its name from the village of the same name, was prominent in the political life of Tamworth for a few decades in the 17th century, and gave its name to the Comberford Chapel, where some of the most prominent family members were buried, in Saint Editha’s, the town’s parish church.[4] However, the Comberford family fell foul of the political turmoils of the civil war, and a Royalist and Catholic branch of the family appears to have become extinct in the male line 1660s, and through its debts and mortgages unable to hold on to its claims to the Comberford estates which were also claimed by a junior, but Quaker and ex-Parliamentarian branch of the family in neighbouring Shropshire.[5]

The claims of Staffordshire origins for the Irish family were first questioned by G.D. Burtchaell, who pointed out:

“The family of Comerford is said to have come from Cumberford in Staffordshire, but the spelling Quemerford and Quivirford [sic] sometimes used by the family seems to be against that theory. The family in county Kilkenny divided into several branches, the principal being those of Ballybur and Danganmore. The family of Callan and Inchiolaghan, from the Christian name Fowke, or Foulke, appears to be closely connected with a branch long settled in the city of Waterford.”[7] Burtchaell appears to have thoroughly doubted the fanciful family trees certified by Betham, and in initialled, pencilled notes on the margins of one of the pedigrees signed by Betham, he wrote: “no such man”, “no such marriage”, and – more tellingly – “All this is pure and unadulterated rubbish ... G.D.B.”[8]

Pedigrees that exaggerated the ancestral claims of the “Old English” families were commonplace in south-east Ireland from the 16th century, and similar fanciful genealogies were constructed, for example, for the Grace, Langton and Shee families of Kilkenny. As we have seen, the origins of the Comerford family of south-east Ireland are to be found not in the Staffordshire family of royalists, recusants and Quakers, but in the village of Quemerford in Wiltshire.

Nevertheless, it is as though the Comerfords of Ireland and the Comberfords of Staffordshire had adopted each other as family and kin. These mutual bonds of affection and adopted kinship, these claims and the confusion they have caused when it comes to identifying the origins of the Comerford family in Ireland, continued through the persistent use of the Comberford coat-of-arms by many branches of the Irish Comerford family from the early 17th century. 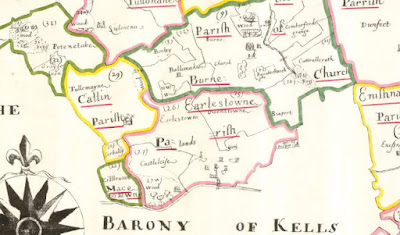 The Down Survey, conducted in 1655-1658, uses the spelling Comberford when referring to Comerford family lands in Co Kilkenny, as in Comberford’s Grange

The Down Survey, conducted in 1655-1658, uses the spelling Comberford when referring to Comerford family lands in Co Kilkenny, as in Comberford’s Grange.

Whether these are links or confusions, there mutual bonds of affection and adopted kinship were consolidated in the following century with Joseph Comerford’s lengthy visit to Tamworth and Comberford, when he erected the Comberford monument in the Comberford chapel in 1725. 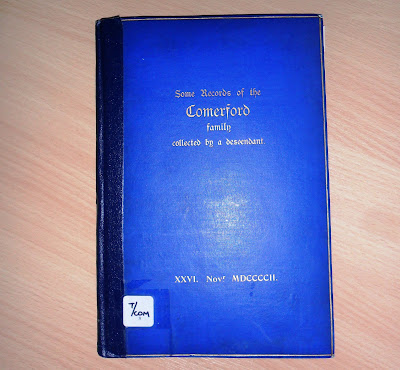 James Comerford’s small pamphlet describes himself as “a descendant” of the Comberford family ... the surviving copy is in the local history collection at Tamworth Library (Photograph: Patrick Comerford, 2011)

It was a mutual bond of affection and adopted kinship that continued with the interesting visit to Comberford, Tamworth, Wednesbury and Lichfield from Ireland by my great-grandfather James Comerford at the turn of the 19th and 20th centuries.

James Comerford collected his findings in a very small, seven-page pamphlet, that was privately published in a small print run on 26 November 1902, and bound with it photographs of the Moat House and Saint Editha’s Church, Tamworth – although, surprisingly, there are no photographs of the Comberford monuments he describes in Tamworth and Wednesbury, or of Comberford Hall. Shortly after the account of his visit was printed and bound, James Comerford added his bookplate and additional handwritten notes to the slim volume, and these notes add further clues to his identity and the date of his visit. 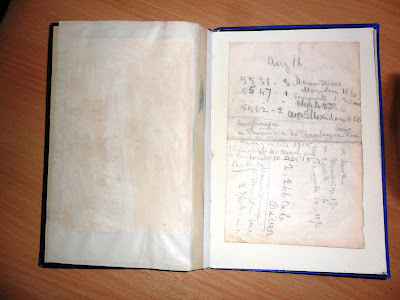 The surviving copy of this valuable publication is in the local history collection at Tamworth Library, Corporation Street, Tamworth (open shelves, T/COM), with a pencilled page of notes recording the details of his visit one August day.

In this rare publication, James Comerford notes that a member of the family “recently was made Bishop (Roman Catholic)” – and in his own hand he adds the words “of Carlow” after the word bishop and adds his initials. Michael Comerford was consecrated coadjutor Bishop of Kildare and Leighlin in Carlow on 1 January 1889, and died on 19 August 1895. The Peel family was living at Comberford Hall from from about 1900 until about 1904, [see Comberford 8: Comberford Hall] placing James Comerford’s visit sometime in the early 1900s but before it was printed and bound in 1902, while the Peel family was living at Comberford Hall. Printing and binding followed soon after. 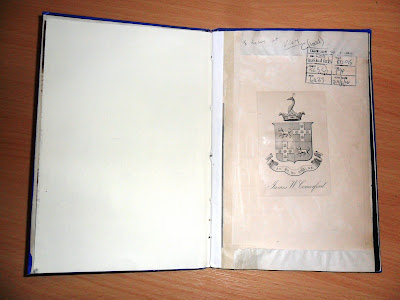 The binding of the slim volume may have been a final tribute by his family to James Comerford, who died 18 days later at 11 Upper Beechwood Avenue in Ranelagh, Dublin, on 14 December 1902.