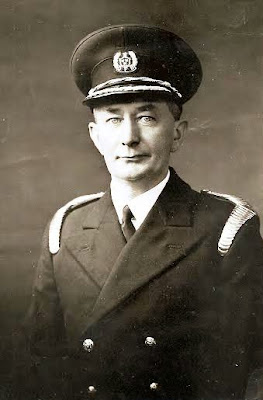 Major James Joseph Comerford (1899-1950), BSc, BE, MSc, MICEI, was an Irish military engineer and an expert in fire engineering. He reorganised the Dublin Fire Brigade in the 1930s and was the superintendent of the Dublin City Fire Services during World War II.

James Comerford was educated at Rockwell College and University College Dublin. He graduated with the degrees BSc and BE degrees in 1921. From 1921 to 1922, he was a Demonstrator in Geology at UCD, and in 1922 he received the MSc degree. In the same year, he joined the Irish Army as a junior subaltern in the Railway Protection, Repair and Maintenance Corps, and was a lieutenant based in Thurles, Co Tipperary, during the Irish Civil War.

A year later, he transferred to the Corps of Engineers with the rank of captain and was posted to the Curragh Command in Co Kildare, where duties he was placed in charge of the Curragh Military Fire Brigade.

He was elected an associate member of the Institution of Civil Engineers of Ireland on 5 January 1925. In that same year, he was recalled to Dublin and was promoted to the rank of commandant, later returning to the Curragh as commandant of the School of Engineers and chief instructor in engineering at the Military College.

In October 1937, he was appointed director of military engineering with the rank of major. The following year he was seconded from the Army to take over and reorganise the Dublin Fire Brigade. In November 1939, he was appointed superintendent of the Dublin City Fire Services.

Throughout World War II, he was responsible for air raid protection and for the formation and training of the auxiliary fire service throughout Ireland. He is particularly remembered for his role during the German air raids on Dublin and for his response to the air raid attacks on Belfast during World War II. He delivered a paper on air raid precautions on 3 March 1941, and another on structural aspects of fire resistance on 5 March 1945.

After World War II, he was living at Annanaar, Clonskeagh Road, Dublin, in 1946.

In March 1948, he was appointed fire adviser to the Minister for Local Government, a post which he held until his death in 1950.

Major Comerford died in 1950 and was survived by his wife, Agnes (nee Doyle) and their three children:

2, Michael James Comerford (1939-2010). He was born in 1939. He was an avid sailor and boater and a Past Commodore of the Grosse Pointe Sail Club, Michigan. He died on 19 December 2010, aged 72. He and his wife Maureen O’Leary are the parents of a son, Eoin Comerford, three daughters, Grainne, Ciara and Niamh, and have four grandchildren.
3, Kieran Anthony Comerford, BE, MBA (1944- ), who married Lynda Byrne, musician, and they have two sons. He was educated at Rockwell College, Co Tipperary, and University College Dublin. He is a retired technical consultant and the author of a number of books, including Newgrange and the New Science.

Much of the information in this profile of Major James Comerford is based on his obituary in the Transactions of the Institution of Civil Engineers of Ireland 77 (1950), p. 174.

Posted by Patrick Comerford at 07:00